WinningInsightM CEO Responds to Ryu’s Statement, Admits to Hitting Him

The agency’s CEO has just posted a message responding to (and confirming) Ryu’s accusations. Below is a translation of that message:

I am the CEO of WinningInsightM.

I apologize for the inconveniences caused by Ryu.

Ryu brought up multiple issues, but first in order to discuss those things there are strict standards by which we must lay everything out. If the company or I did anything wrong, we will receive punishment on those points, but if it’s the opposite responsibility must be taken.

Now I will start by talking about what everyone is curious about, the assault.

The course of action is different than everyone thinks and is thus out of scope; Ryu saying that the file was is thick as his forearm is not the truth, the thing was really a thin vinyl file that we commonly use; something that is not shocking and that is weak and light.

It is true that I hit Ryu in the head with this paper vinyl twice.

Ryu made me, the company CEO, a criminal complaint.

The picture below is the vinyl file submitted to the police station for evidence.

The item below is what Ryu is claiming is as thick as a forearm and caused him to lose his train of thought, lose his hearing, and make his ears bleed.

No matter what, hitting someone for any reason is bad, and I am reflecting a lot on it. That point will also be dealt with accordingly.

However, no matter what I don’t think that it’s right to suddenly claim that two pieces of A4 paper in a thin vinyl file is a weapon of terror.

I am extremely sad and disappointed that Ryu would be like this to this extent.

Below is the picture that the CEO uploaded in reference to the file that he claims he hit Ryu with: 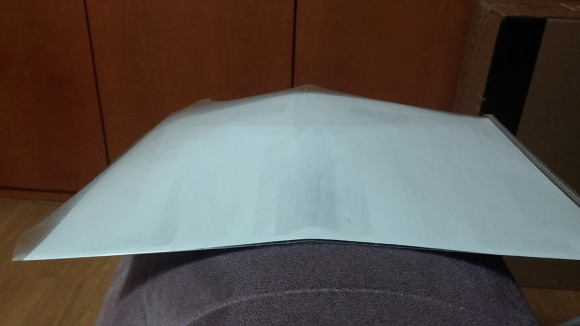 It seems that while the CEO has admitted to hitting Ryu in the head with the files, he failed to address many of Ryu’s other accusations such as verbal abuse and being forced to blindly sign contracts. Be sure to stay tuned to moonROK as this story continues to break.