K-pop Politics: Should Idols Use Their Voices to Take a Stance?

Over the past week, the world’s eyes have been on Taiwan as the country elected its first female president, Tsai Ing-Wen. Voting President Tsai into office was an undoubtedly momentous and historical occasion for the nation, but one that was complicated by an unusual and unforeseen series of events involving Chou Tzuyu, a member of JYP Entertainment’s newest girl group TWICE.

Tzuyu was born and raised in Tainan, Taiwan before moving to Seoul to train and eventually debut as a K-pop idol under JYP Entertainment. In a recent televised broadcast in Korea, Tzuyu and the members of her group TWICE were filmed holding flags from their home countries – some members held Korean flags and some Japanese. It seemed to be a no-brainer that Tzuyu – who, again, is from Taiwan – would be holding a Taiwanese flag. Little did she know that a little piece of cloth would have such a huge impact on not only her career, but on a national election.

Since the end of the Chinese Civil War in 1949, there have been two competing parties in China – the Republic of China and the Communist Party of China. The CPC rules mainland China and believes in “one China”, claiming that Taiwan is a part of their territory, while the ROC occupies the island of Taiwan and flies a different flag: the flag that Tzuyu held in her hand on TV. Thus, many saw Tzuyu’s flag as an indication of her support for the independence of Taiwan from China and the assertion that the ROC has rightful claim to all of China. As a result, the CPC banned all JYP groups from mainland China, cutting off a major source of revenue for JYP Entertainment and resulting in what appears to be a forced apology video from a meek and timid looking Tzuyu. In turn, the apology video – which was released on election day – infuriated and inspired potentially thousands of voters to turn out to the polls on January 17, cementing the win for pro-independence candidate Tsai Ing-Wen on Saturday.

Tzuyu’s apology video has since garnered more than 6.2 million views and incited empathy for the 16-year-old and infuriation directed at JYP for not protecting her. Though Park Jinyoung is certainly one of the most talented and successful producers in the world, the Korean public and critics alike are decrying the sacrifice of his artist for the sake of his Chinese shareholders as perhaps the lowest point in his career. Over the past 20 or so years, JYP has built and maintained a reputation for being more like a family than a record label, raising and caring for each individual artist from a young age as if they were their own children, and protecting them from harm. However, this video in which a confused and terrified Tzuyu is forced to read off of a script that she clearly doesn’t understand or believe in, brings the façade of all of those warm and fuzzy family feelings crashing down around JYP, exposing the record label for what it truly is at heart: a company with a bottom line to maintain and shareholders to please.

The events surrounding Tzuyu, Taiwan, China, and JYP Entertainment over the past week lead one to wonder, what exactly is K-pop’s role in the realm of politics? In the United States, pop stars freely hand out endorsements every election season; Beyonce, Jay-Z, Miley Cyrus, Lady Gaga, and countless others very publicly endorsed Barack Obama when he was running for office, and Katy Perry, Ariana Grande, Ellie Goulding, Amy Poehler, and more have already stated that they’ll be voting for Hillary Clinton in the 2016 presidential election.

What’s far more admirable than this though, is when celebrities use their spotlight to call attention to other social and political issues like gun violence and police brutality, much like Kendrick Lamar did with his most recent album, “To Pimp a Butterfly”. Many argue that being a celebrity comes with the privilege and the burden of a higher social responsibility; that they can and should use their influence to shine a light on what is wrong, to give voices to the thousands, even millions of unheard humans affected by those wrongs, and to demand and ultimately affect change. But can we say the same for K-pop celebrities?

Amos Farooqi, an American graduate student majoring in Korean Studies at Korea University in Seoul recently submitted a controversial and thought-provoking essay to moonROK addressing freedom of speech in Korea. In his essay, Amos explores the systematic suppression of those who would speak out against Korea’s conservative political and social agenda and the politicians who create and enforce these laws. It’s hard not to see the many parallels between the financial and political forces of intimidation that bullied Tzuyu and JYP into an apology and those that blacklisted Shin Jung-hyun from the music industry in the 1970s. Is it that political ambiguity makes celebrities more relatable to the general Korean public, or is it that they are afraid to speak out for fear of career-ending consequences? Farooqi gives his answer in the essay below.

[Please note that any opinions expressed in the essay below are those of Amos Farooqi’s and not of moonROK’s.]

Shin Jung-hyun was riding high. He was the most in demand producer and artist in the Korean music scene in the 1960’s, producing hit song after hit song. Then it all came crashing down. In 1972, he received a call from the Blue House. They requested he write a song praising the authoritarian president Park Chung-hee. Shin, distasteful of Park’s dictatorship, declined. Another phone call was made, this time requesting he write a song praising Park Chung-hee’s Democratic Republican Party. Yet again, Shin declined. In reaction to these requests, Shin wrote his magnum opus, “The Beautiful Rivers and Mountains”. It was a ten-minute psych-pop monument dedicated instead to the beauty of Korea and its people. The dictatorship didn’t receive it very well, and put a target on his back; Shin was blacklisted by the music industry, which was beginning to cooperate with Park’s dictatorship in censoring so-called “subversive” music. He was ultimately jailed barely a few years later on charges of marijuana possession, which some believed were trumped up by the Park regime. Such censorship practices continued through the Park and Chun Doo-hwan dictatorships, with many musicians blacklisted, until democratization in 1987.

But while democratization brought about newly found freedoms that revitalized the Korean film and art scenes, allowing them to seriously examine controversial historical and political issues, which would have been unheard of under the Park and Chun dictatorships, it has done little to revolutionize Korea’s music industry, which has simply moved on to censoring itself. Artists are rarely given a chance to record a message on serious social and political issues. Even in the face of a plethora of serious issues and scandals that have rocked Korea over the past three years, the K-Pop industry refuses to let their artists speak out.

The administration of President Park Geun-hye, daughter of Dictator Park Chung-hee, has dragged its feet on the investigations into the Sewol Ferry Disaster and meddling by members of Korea’s intelligence service in the 2012 presidential election. She has also continued a trend started by her predecessor, Lee Myung-bak, of using Korea’s heavily flawed defamation laws to crack down on free speech, at one point demanding the popular KakaoTalk app hand over records of users’ conversations that may have said bad things about her. In fact, South Korea saw its press freedom rating downgraded from ‘Free’ to ‘Partly Free’ by Freedom House in 2011 under the Lee Myung-bak administration. It has yet to recover under Park, who at one point compared masked demonstrators who opposed her presidency to ISIS. Artists and filmmakers in Korea are speaking out against the rise of a soft authoritarian government, and many have been censored because of it. And while mainstream artists and performers worldwide speak out on social and political issues affecting their respective communities or the world, those in Korea’s music industry remain silent. 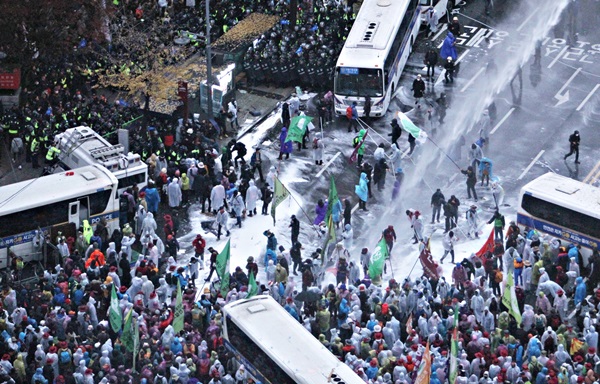 This may be due to the fact that the large K-Pop labels rely heavily on the government for marketing their brands outside of Korea. The so-called “Korean Wave”, or hallyu, was put into motion by the Kim Young-sam administration’s segyehwa policy in 1994, which saw entertainment as one way to diversify Korean industry and expand its global soft power. Since then the government has advised and poured in hundreds of millions of dollars into the entertainment industry, a large chunk of which has gone towards K-Pop labels.

Labels may be hesitant to bite the hand that feeds them and lose out on funding to help their global marketing campaigns. It’s the sort of relationship that harks back to the era of Park Chung-hee’s dictatorship. Park held a similar cooperative relationship with the large conglomerates, known as chaebol, that were driving Korea’s economic growth in the 1960’s and 1970’s. As long as the chaebol stayed out of politics, Park was more than happy to provide them with the funds they needed to expand their businesses. Those business executives who began to hold political ambitions or spoke out against the Park regime found themselves frozen out of his economic plans.

This only makes major K-Pop labels complicit in the continued degradation of democracy that the Korean people fought and died for in the face of brutal dictatorship. Music has always been an avenue for self-expression and protest, from Fela Kuti’s lifetime fight against military dictatorship in his homeland of Nigeria, to Kendrick Lamar today speaking out against racism and police brutality in the US. This is not to say that all musicians and artists should be politically active. However, it is important for at least some to recognize the platform they hold and the potential they have to help enact change. Thus, it’s disheartening to see K-Pop performers remain silent on issues that hit so close to home. And in the wake of the effective blacklisting of Tzuyu, much like Shin Jung-hyun at the height of Park Chung-Hee’s dictatorship, I doubt we’ll see anyone break that silence anytime soon.

Do you agree with Amos? Should K-pop stars use their platforms to affect change in Korean politics and society?