EXY made a name for herself on the survival program “Unpretty Rapstar 2” before debuting with Starship Entertainment’s newest group WJSN, and since her debut with the group she’s only blown up more.

The rapper sat down for an exclusive interview with InStyle Korea to talk about her debut experience, “Unpretty Rapstar,” and much more.

EXY recently made an appearance on the show “King of Masked Singer,” surprising the public with her vocal skill despite her position as a rapper. On that subject, EXY told the magazine, “After preparing for that and the WJSN comeback simultaneously, my husky voice got more intense. Having converted from a singer to a rapper I’ve always had a desire to sing, so I was touched that I was just able to quench that thirst.”

When asked how a girl from Busan became WJSN’s EXY, the rapper reminisced on her youth, saying, “[One day] I listened to Lee Hyori’s ‘Ten Minute’ and wanted to dance. I would dance in front of all the neighborhood ladies, and since my parents believed I had talent, with their support I began my life alone as a trainee.”

Of course, training to become a Kpop idol isn’t easy for anyone, EXY included. The singer discussed her hardest times as a trainee, saying, “It was hardest when our debut continued to get pushed back; I felt like the future was nowhere in sight. I was always ill-at-ease because there were so many situations where trainees failed because they were fed up with waiting or got cut halfway through. Thinking of my family eased my mind. It was a hard decision for my parents, but they trusted and supported me at a young age, so I didn’t want to disappoint them. If I had only thought of myself, I probably would have given up immediately.”

Through the hardships of trainee life, it seems that “Unpretty Rapstar” had a positive influence not just on EXY’s career, but on her own outlook: “My self-regard was shaken having lived for so long as a trainee, but doing ‘Unpretty Rapstar 2’ it became better. The first time I stood in front of the public I received much more praise than I thought I would. Each comment was so touching, so I felt my hard work from all that time was finally paying off. I found out that from now on I can really make my goals or the things that I want to achieve actually happen.”

Despite that, the pressures of the show were intense. EXY described the stress of the program, saying “Everything is live or die [on the show], so I lost about 8kg on ‘Unpretty Rapstar 2.’ Just being on the program alone was burdensome, and I also worried that how I did [on the show] would effect the debut of the members I trained with.” 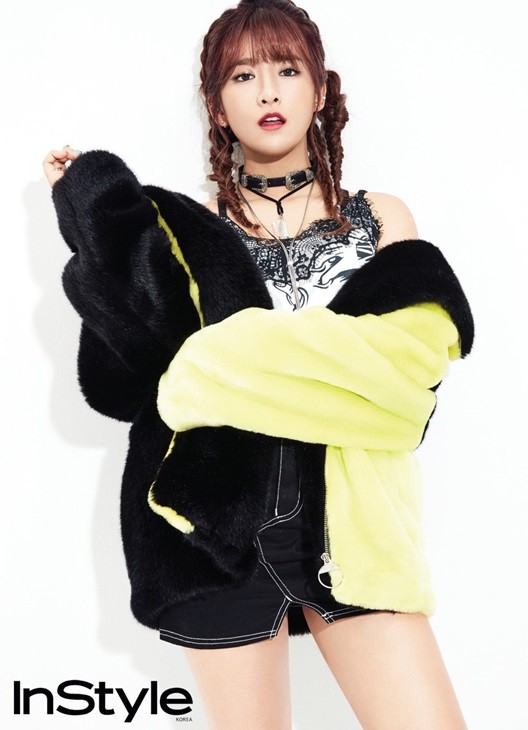 Now that she’s come out on the other side of the debut process along with 12 other members, EXY seems slightly more at ease. When asked to describe her members, she said, “Each member’s charms are of course different. Since we’re all so different, it’s fun to individually pick out the things we want to see. We can also show so many different team concepts because of that. Like on our first album, when we went with a strong, hip-hop, girl crush concept on ‘Catch Me,’ but also released a cute, precocious song ‘Mo Mo Mo’.”

Finally, when asked what the one thing she wants to do as she continues living, EXY recalled the limitations of her trainee days, saying, “I want to live doing the things I want to do. Right now because I’m an idol I can never really be free. However, if I look at it long-term, even if I live to regret it later I want to live doing what I want. It’s an epiphany I gained living as a trainee.”